The Mechanics of Quantitative Easing and M2

In recent months M2 has exploded higher by almost 3 trillion, generating enormous market chatter. This note briefly describes the mechanics of how Fed actions has led to a spike in bank deposits, which in turn has led to a large increase in M2. Note that M2 is largely comprised of different types of bank deposits, including demand deposits, savings deposits and time deposits. I’ll first go over the basic principles of central bank and commercial bank money creation, then apply the principles to recent events. 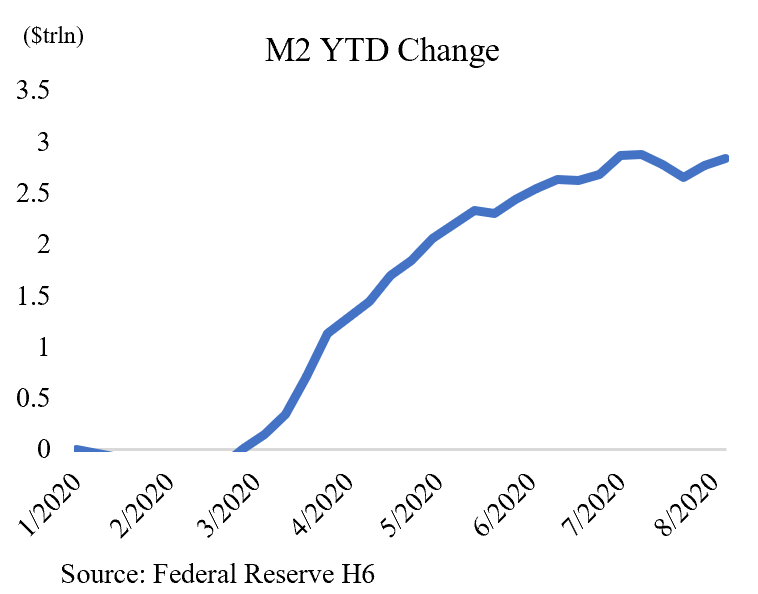 Since the COVID-19 panic in March, the Fed has massively expanded its balance sheet through asset purchases and an alphabet soup of Section 13(3) lending facilities. Just to make things simpler, I will focus on the Fed’s balance sheet expansion through QE purchases FX swap loans, since those two are by far the largest contributors. In the two figures above, you will see that the Fed’s balance sheet exploded by around $2.5 trillion year to date, mostly from purchases of Treasury securities and Agency MBS. That increase has been mirrored in increased reserve holdings of commercial banks and the U.S. Treasury, which together also rose by around $2.5 trillion.

In March investors moved their money from banks deposits to Treasury bills, which are safer cash like investments. Reserves flowed from commercial banks to the TGA as investors purchased around $2.5 trillion in newly issued bills. Some of those purchases were direct, others indirectly through money market funds. Money market funds received around $1 trillion in inflows in March, which was largely invested into Treasury bills. The two charts below show the surge in bill issuance and money fund assets.

Since March the level of reserves held by commercial banks exploded due to Fed actions, but the amount of bank credit also significantly increased. Many corporations were worried about the impact of COVID-19 and increased their cash holdings by borrowing from banks. Higher reserve levels and bank credit led to an explosion in bank deposits, which in turn led to an explosion in M2. Note that in the chart above I also include Fed FX swaps in the section of bank liabilities. Fed FX swaps create reserves, but they are balanced by an FX swap liability rather than bank deposits. (Technical note: the FX swap shows up on the balance sheet of a foreign bank’s head office, and appears on the U.S. branch office’s balance sheet as a ‘due to foreign office.’)

Understanding the drivers of the increase in bank deposits can be helpful in assessing their impact on economic activity. Growth in bank deposits due to credit growth from economic optimism is very different from bank deposit growth due to QE and corporate fear. The former likely leads to more purchases for goods and services, the latter not so much. Corporations did not borrow to invest in the future, they borrowed to hoard cash amidst uncertainty. QE essentially converts Treasury securities into bank deposits, which is basically one form of money to another. Money that was saved in Treasuries was not money that was going to be spent on goods and services. It seems more likely to be moved into other financial assets, like corporate debt or equities. Indeed, corporate debt spreads have narrowed significantly and equity prices have skyrocketed.