The new FIMA Repo Facility helps patch up a weakness in the Fed’s global dollar safety net. Since the GFC, the Fed has assumed the role of lender of last resort to the off-shore dollar banking system through it’s FX Swap Facility. Foreign central banks (“CBs”) could borrow from the Facility and use the proceeds to backstop the dollar needs of banks within their country. This helps prevent dollar panics abroad, which would affect the Fed’s ability to control domestic dollar interest rates. The Facility covers virtually all major dollar users, except China. The dollar needs of Chinese banks are backstopped by the Chinese government’s large Treasury holdings. This set-up works, until the Treasury selling is so acute that the market malfunctions and everyone has trouble monetizing their Treasuries. In this post we review the role of the Fed’s FX Swap Facility and show how the new FIMA Repo Facility is largely a China Repo Facility designed to both strengthen rate control and the Treasury market.

Dollar banking is a global system where banks both within and outside of the U.S. make dollar loans and issue dollar deposits. Foreign banks have around $12t in dollar liabilities, of which around $10t are booked off-shore. The on-shore and off-shore dollar systems are closely connected, as off-shore banks with dollar needs can borrow in the on-shore market and in the process push up on-shore dollar interest rates. Off-shore banks lack stable sources of dollar funding and are prone to bid up dollar funding rates in a crisis. This means that the Fed cannot control short-term dollar rates without also having a footprint in the off-shore dollar world.

One of the ways a CB controls interest rates is by acting as lender of last resort at a set lending rate. In the event of a panic, interest rates stay below the set lending rate because banks can borrow from the CB at that rate. This system is possible because a CB can print unlimited amounts of its domestic currency to lend. But a CB runs into trouble when banks in its country need foreign currencies, which it cannot print. In that case the CB either dips into its own FX reserves or borrows from another CB.

The Fed acts as dollar lender of last resort to off-shore banks via its FX Swap Facility, which lends dollars to foreign CBs that they in turn lend to banks within their country. Technically what happens is the foreign CB prints its own currency, sends it to the Fed as collateral, and receives newly printed dollars at a set interest rate. The foreign CB then lends these dollars to banks within its border on a collateralized basis. (Note that foreign banks can provide foreign currency assets as collateral for their dollar loans.) Global dollar rates are controlled because the foreign banks can borrow at the rate set by the Fed’s swap lines.

Access to the FX Swap Facility is limited to a small set of jurisdictions with strong relationships with the U.S., including Canada, the E.U., Switzerland, and Japan. In times of crisis, the Fed usually temporarily extends access to a larger set of friendly countries. During the Covid panic access to the Facility was extended to a number of countries including Brazil, Mexico, South Korea. Foreign CBs without access to the Facility backstop the dollar needs of their banking system by holding ‘rainy day’ dollars funds. These dollar reserves are usually held in the form of Treasuries, which Foreign CBs sell for dollars to lend to their banks. This set-up works well, until Foreign CBs have trouble selling their Treasuries like they did last March.

The new FIMA Repo Facility allows any Foreign CB who owns Treasuries to obtain dollars from the Fed without having to sell them outright. It was first announced as a temporary facility last March and made permanent at the July FOMC. It is very different from the FX Swap Facility because a Foreign CB must already own Treasuries in the first place. Technically, the Fed prints new dollars and lends it to the Foreign CB, who provides Treasuries held in custody at the Fed as collateral.

China is the only country with large dollar needs, without FX Swap access, and has large Treasury holdings. BIS data observes that Chinese banks have at least $1t in USD liabilities, with the exact level unknown. Chinese official data reports $3t in FX reserves (not all in dollars), and TIC Treasury data shows Chinese Treasury holdings of $1t. (Note that TIC Treasury data includes private and official holdings, and that the ultimate owner of Treasuries can be hidden through webs of holding companies. China is rumored to hold part of its Treasury holdings in Belgium.) In any case, China is a large economy with a banking system that has substantial dollar needs. Without access to the FX Swap Facility, China would’ve met emergency dollar needs through Treasury sales. In a crisis this contributes to episodes of Treasury market stress like last March, which was in part due to selling by Foreign CBs.

The FIMA Facility helps backstop the off-shore dollar banking system and helps protect the Treasury market, whose well functioning is essential to rate control and financial stability. Treasuries are a foundational safe asset in the financial system, but cannot play that role if their liquidity is impaired. Not just foreign CBs, but domestic banks, pension funds, and investment managers all hold Treasuries on the assumption that they can be readily converted to cash. In a sense, investors “deposit” their dollars at the U.S. Treasury and expect to be able to withdraw them at any time. When investors find out they cannot withdraw their dollars, then an old fashioned bank run takes place. All dollar assets are sold for cash, and dollar rates shoot up as everyone tries to borrow dollars.

The FIMA Facility is another step (among others) helping to strengthen the ‘moneyness’ of Treasuries. Foreign CBs now have a guaranteed avenue to “withdraw” dollars held as Treasuries. This in turn further reduces dollar liquidity tail risk and strengthens the global dollar system. 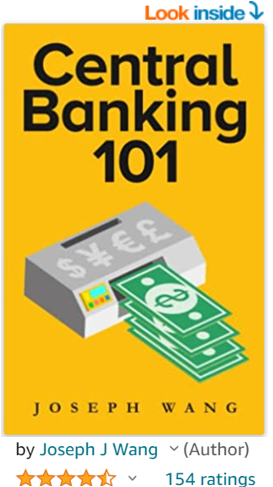